To install the DSL Forge, go through the following steps.

To know which package is the most appropriate for you, select one of the following alternatives.

In this scenario, users are interested in having a DSL editor shipped with HTML/JavaScript applications. The generator outputs a static web project ready to be debugged under Eclipse. The most appropriate distribution to use is Eclipse IDE for Java EE Developers as it comes with a simple HTTP Preview server easy to configure.

Use the update site https://dslforge.org/downloads/tooling/repository/

By default, the Eclipse IDE compiles all projects in the workspace against the running platform, sometimes the IDE itself, sometimes not. RAP applications are compiled against the Equinox Basic Target. More info about setting targets can be found at the Eclipse RAP Developers Guide.

There are two ways to set the target: you could either import the base target platform (may contain features you are not interested in, but everything is there to run the examples), or use the  generated target platform.

The easiest way to set the target platform directly from Git repository. Here are the steps:

Create a new target definition file and compose the features from P2 repositories: press “Add Software Site” and enter the URLs of the repositories you want, then select the features you are interested in. For example if you are targeting Neon releases, use the following repositories:

Below an example of a target platform which, in addition, uses some of the RAP Incubator components (Tabbed Properties View, Common Navigator), Gemini JPA and EclipseLink for persisting resources metadata. 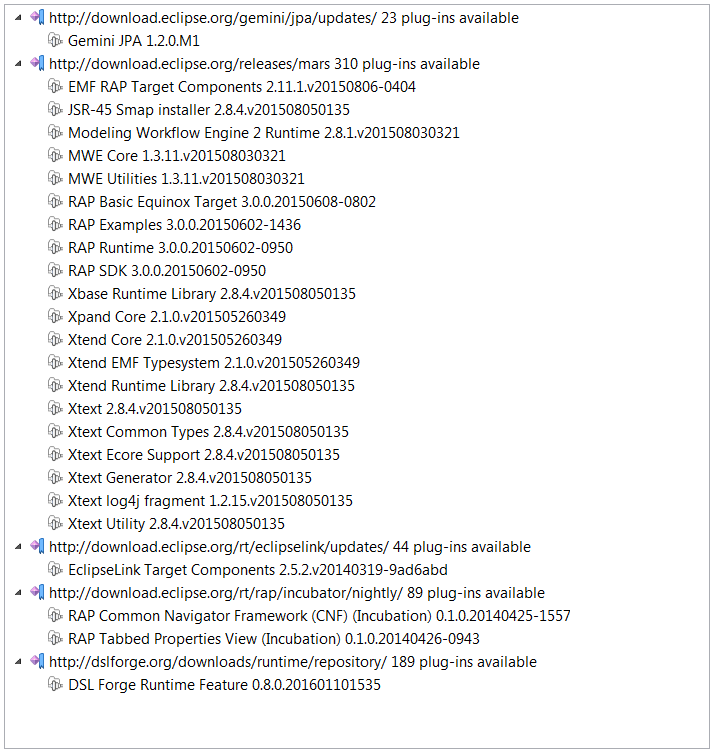 Activate the target platform by clicking the link “Set as Target Platform” in the upper right corner of the target editor.